This video surfaced a few weeks ago, when various people in Australia alerted me of its presence. It’s from the Australian TV newsmagazine Lateline, excerpted from an extended interview with Stephen Fry.

I’ve been putting off blogging because I feel like the Harvard event is this big elephant in the room, and I felt like it would be in poor taste to chatter about other things without acknowledging it, especially since my Twitter followers and blog readers played a huge part in making it happen. It’s been 9 months since the event, and while I haven’t been carrying Stephen Fry’s baby during that time, my thoughts on the whole experience have finally come to full term. Awww.

On February 16th I got an email from Greg Epstein, the humanist chaplain at Harvard University. He said that the bad news was that they didn’t have the funds to fly me to Harvard, but the good news was that if I could get myself out there they could put me up on campus and I could sing my Stephen Fry song to a sold out room of 1,000 people – and also to Stephen Fry. The Harvard Secular Society was presenting him with a lifetime achievement award, and he was going to be there to accept it in person.

It all happened so fast and I packed in such a hurry that I actually forgot to pack a ukulele. So when I went into Seattle the night before my flight to go to Jonathan Coulton’s show, I frantically texted Kristen Shirts that I needed to borrow a ukulele. I met her on her front step and she pointed out the silver Sharpie she conveniently included in the front pocket for when I have Stephen sign it.

It was the most overwhelming two days of my life. I flew from Seattle to Chicago, and from there to Boston, a total of 9.5 hours in the air. I don’t remember much about the chain of flights, but I do remember being angry at the people in Chicago because all of them stood still on the moving sidewalks. I landed at Logan Airport after dark. Greg Epstein had told me how to get to the Red line and into Cambridge, and I huddled awkwardly in the subway with my garment bag between my knees and Kristen’s ukulele on my lap. As soon as I resurfaced from the subway station, I tucked into the first eatery I saw, a Qdoba, and ordered a quesadilla just to warm my numb fingertips.

I checked into Harvard Square on Foursquare. I’m not normally one to use Foursquare, but I’d been on the ground for almost an hour after coming from so far away, and I didn’t feel like I was really there. I wanted something to make me feel like my presence had been marked, like my trip was of consequence. Checking in made me feel like I had planted a very tiny flag.

I walked back and forth in the dark for a while, trying to follow Google directions on my phone to the dorm block I was supposed to be staying in. It was so cold that there was a fine frost all over everything; it concentrated in all the nooks and crannies of the old brick buildings so that it looked almost like flour, except for the way it caught and scattered light. I retraced steps, circled some blocks a few times, eventually choosing a cab ride over the alternative (freezing to death). I met Meredith, an undergrad in the HSS who had volunteered an extra bed in her suite for my use, and I crawled into this bed very quickly. I slung my iPad over the headboard, and set Tom Lehrer’s “Harvard Fight Song” to wake me up in the morning.

The next morning Greg Epstein and I went into the chapel and worked through my staging. I nervously conferred with him about how, specifically, to angle myself.
Do I want to play it to the crowd?—
Well, no, because he’s right there, and it is a song addressed to him—
Well, but then do I make eye contact with him? Do I maintain—
No, that would be awkward. Is that awkward? Is that too forward?—
I mean, I am singing a song about having his babies, so I guess the question of “too forward” isn’t really on point—
Still, I probably shouldn’t ask for “his seed” necessarily, because that’s super rude when he’s standing right there—
Oh my god, he’s going to be standing right there, isn’t he?…

Greg opened up the room that the Harvard Uni Choir meets in, so that I could practice and work out my set.

When I was sent out for my opening set, the crowd seemed unresponsive, and any laughter during my songs was hushed and brief. I interpreted this as them not being amused by my presence, or not understanding my relevance to the event, but my friend ToZm explained to me later that they just couldn’t hear my vocals through the lapel mic I’d been outfitted with, and so the reason the room went super quiet whenever I made musical sounds was because everybody was straining to listen. I hope he wasn’t just saying that to make me feel better.

I debated singing Tom Lehrer’s “Harvard Fight Song,” but I was interpreting the crowd’s attentive silence as polite tolerance, and so I figured tongue-in-cheek satirical fight song might be wasting their time. I later asked Meredith if skipping it was the right move; she said, “Oh, it would have been totally fine. You know we’re a school full of nerds when we have an ironic fight song.”

The first time I actually saw him was when he came out to deliver his acceptance speech. He took the lectern to a standing ovation, and myself and the HSS members around said to each other over the din of applause, “Oh my god he’s actually here! That’s actually him!”
The Harvard Humanist YouTube channel has his speech in its entirety, divided into chapters, and you really should set aside the hour and a half and watch/listen to it sometime because it’s really something else.

After his speech, a few members of the Secular Society went onstage one a time with some prepared questions. I was the last in the line of student questions, and as soon as I stood up from the crowd, Mr. Fry knew what was afoot. In the Secular Society’s footage you can hear direct-from-the-board audio of him saying, “Oouh… Molly!”

Even after all this time when I watch or even listen to footage of me singing the actual song, my heart jumps. If it weren’t for the muscle memory of singing it at so many W00tstocks, my racing pulse and shaky hands would have sabotaged the whole thing. Once I started, it just kind of spilled out of me. After Greg adjusted my mic (as you can see in the video), everyone could hear me, and the polite, quiet crowd I opened for burst out with wonderful warmth and noise and energy. Mr. Fry flushed red, and tried to keep eye contact with me from across the stage, frequently breaking to dab his brow or bury his face in his palm. I was glad that he’d heard the song before, because he (I hope) had an idea of where and what all the punchlines were; at times I thought I could see him bracing himself at the appropriate moments.

(My omission of the the phrase “send along your seed” until the last chorus was not really a premeditated choice: it was me not having the nerve to say it at the top of the song, and gaining momentum and confidence by the end.)

When I finished, Stephen stepped back from the podium and walked towards me. I walked towards him, not sure if he was going to hug me, or shake my hand, or give me a stern pat on the head and a No. He said “Thank you so much,” and kissed me on the forehead. I reached out to him as he turned back towards the lectern, and he took my hand. “Obviously, the question is rhetorical,” I said. He laughed and returned to the lectern, and I returned to my seat.

Since then, when I’ve been asked about it, my first response is always “It was amazing— He smells so good!” And it’s not an elaboration: he did smell very nice. And I think it sits so sharply in my memory because Kristen Shirts direct-messaged me on Twitter “You have to tell me what Fry smells like. Just @ me like ‘vanilla and leather and old books’ and I’ll know what you’re talking about.” So when I finished the song and he met me at center stage, I got a light waft of it and took mental note. He smelled like roses and cologne, sweet but masculine. 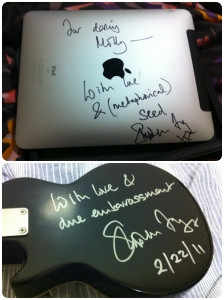 Afterwards I asked Stephen to sign both Kristen’s ukulele and my iPad. He was in a cloud of event organizers who were arranging to walk him out of the building, and I edged into the circle and said “Stephen, could I bother you to write your name on some of my things?” He said as he turned around, “Not at all—Oh, Molly!” and pecked my forehead again. I explained that the iPad was mine but the ukulele wasn’t, and he obligingly signed and personalized them both.

Afterwards Greg and the event organizers walked Stephen to a post-show mixer, in their offices a short walk off campus. Many of the other students I talked to were geeking out just as much as I was about being there. A great big semicircle, maybe 3 people thick all around, formed around Stephen, and he regaled them with stories about taping A Bit of Fry and Laurie, and Blackadder, and Last Chance to See. They asked him if there were any plans to work with Hugh Laurie in the future, and he said he was based in London and that Hugh was very busy shooting House in LA, and he was happy to see Hugh finding such success.
“He doesn’t have someone singing about carrying his children though,” someone chimed in.
“No,” Stephen said, “I’m very lucky in that regard,” and he raised his glass to me with a nod.

And I’m very lucky too. 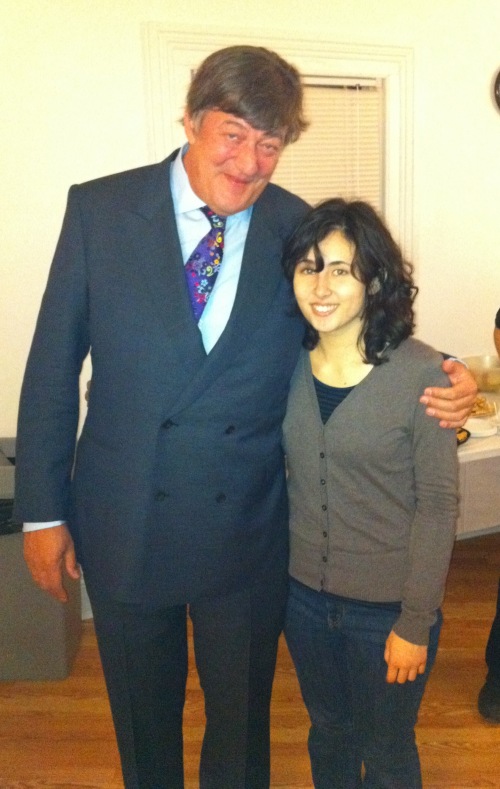 Thank you everyone who donated or ordered a thing, for investing in the chance of a lifetime and enabling me to physically get there. I feel like there will never be enough that I can do to express my gratitude.

Most of all, thank you Stephen, for being such a good sport and indulging my silly ode.