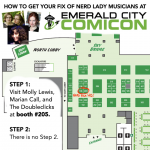 I’m part of NERD FOLK MEGABOOTH with The Doubleclicks, Marian Call, and Alaska Robotics. There will be fabulous prizes! I personally love nothing more than sitting in a chair and watching the cosplayers on parade, so I’ll probably be parked there unless otherwise stated.

HERE IT IS OTHERWISE STATED:

I’m also trying a new thing for Emerald City, and if it works I’ll expand its use to other cons I do. We’ve all had the experience of being at a con and the data doesn’t work because all the smartphones in town are in the same building, right? And then cool impromptu stuff gets announced on Twitter and I miss it because I couldn’t get Twitter to load. At DragonCon this year I found a workaround, where I turned on SMS alerts for my Twitter account, and subscribed just to the tweets of friends who were at the con. The data network was bogged down but the PCS network was fine.

So this year for ECCC I’m trying a service called Remind 101 (meant for teachers to text reminders to their students, but there’s nothing in the terms that says you HAVE to be a teacher) to send out a few text messages throughout the day when cool stuff happens. Maybe I’ll be invited on a panel last minute, or maybe I’ll do a ninja gig with my booth-mates – I don’t know yet! You can keep in the know by texting the phrase “@mollycon” to (425) 440-3209. At the end of the week, the list will be wiped clean and I’ll never bug you again (unless you sign up for alerts for the next con).

I moved my domain to a newer better host and moved from WordPress.com to WordPress.ORG. And if you’re reading this post right now, it means it worked! I’m particularly excited about the kitted out shows page.