John Hodgman just wrote a lovely thing about the strange on-again-off-again nature of mourning in light of David Rakoff’s recent passing, that is very much worth your time.

It struck a chord with me particularly because I’m coming to terms with the loss of my grandfather, who passed away this weekend at 83.
I could only hope to beat his high score.

He had been on the slow decline for about two years, and my grandmother has shown admirable poise and resilience throughout the process. Over the last few months she has been dealing with his hospice care, all along making preliminary arrangements for his memorial service so that when the time came we could use our energy to reflect on his life and comfort each other, and simply set the wheels in motion.

I found out about his passing at GeekGirlCon. My mom texted while I was sitting with Ben and Dammit Liz, so I ran upstairs to call her and she told me the news. She said that his three daughters and wife were all there at his side and that he just slowed down until he stopped.

I went down the stairs and told Ben and Liz, “He’s gone.” Ben has this face that he makes when I’m sad, where his brow knits and the corners of his mouth droop and his eyebrows kind of twitch. It’s his “I’m sorry” face, and usually when I’m trying to deny that I’m sad, he makes the I’m Sorry face which makes me realize that I look sad and lights this fuse in my brain that makes me start sobbing. So, I told him not to make that face. Liz and I would point to him and yell at him when we saw his eyebrows start to twitch, and he would replace it with an Upper-Class Twit face.

My goal almost immediately became to get myself to a place where I could joke about it. I hate to cry in front of people, and being able to shrug it off was the best way I could think to tell people the news without crying on them. When friends asked about my plans for the weekend, I told them that after GeekGirlCon I was going to “GrandpaCon.”

I peeled myself out of bed on Sunday morning and went to the second day of GeekGirlCon. I busked with Vixy & Tony and The Doubleclicks on the con floor, and it was amazing fun; I sang the entirety of Yakko’s World, and some people actually sang along. I went and got pub food with The Doubleclicks and some friends after the expo hall closed, and then we went back to my house to play Rock Band. After we played through about a dozen songs, we ended up walking as a group down to the grocery store to buy ice cream and soda, and we watched Mystery Science Theater 3000 and ate root beer floats until everybody got sleepy and left.

That night when I went to bed, I thought about how I’d have to get up in the morning and do laundry because my nice pants for the service weren’t clean, and I still hadn’t packed. I thought about how I’d have to leave for the airport by 12:30 if my flight was at 2:30. When I woke up the next morning, I didn’t feel like my grandpa was no longer alive; I felt more like my grandpa was dead. Semantically they’re the same but emotionally they’re different, and I think I’ll go back and forth over that line a lot.

My grandpa was awesome. 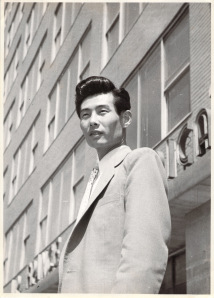 As everyone is getting into town for the service I’m only starting to collect the full versions of some stories, but I remember some things.

I know I’d get most details of these stories wrong. The facts are distorted in the way that comes from decades of telling and re-telling, like grooves on a vinyl record flat thing that have worn down from being listened to too much.

I’ve had a lot of stable things in my personal life go sort of cattywampus since I’ve gone to college. I’ve trained myself to deal with things like this quietly, under the assumption that everybody deals with problems of equal gravity as often as I do, and that everyone else has the decency and self-discipline to keep a lid on it. I decided not to mention anything of my grandfather’s passing until after GeekGirlCon because I didn’t want to spend all of Sunday hearing people go “Sorry about your grandfather.” Maybe I should open up to that sort of thing too; I shouldn’t be afraid of sympathy, probably.

My dad’s mom died a week before I went to do the first W00tstocks in San Francisco in 2009 (and that whole venture turned out pretty well for me in the end), and then in that same month the Poker Face video went viral, so I’m telling myself that this is just good luck for the scary three-week tour I’m going on next month. Usually when a really crappy thing happens to me, the universe has a tendency to pile on good things to make up for it; I usually break even on this stuff.

A few years ago my grandpa was showing the warning signs of Alzheimer’s. I’m still not 100% sure if that’s what it was. When they asked my grandpa if he wanted to pursue specific diagnosis and treatment, he refused, saying “What good is that going to do? We can’t get rid of it, we can only slow it down. What does such treatment add to the quality of my life? It only adds struggle at the end.” And it was a fair point. So he made sure the house was paid off, transferred control of his assets and finances to my grandma, and stopped worrying about those things.

The last time I saw him I showed him a picture of me, my mom, brothers, and grandmother, on my graduation day. He was falling asleep so I tried to be succinct, but I explained to him that without his help, I couldn’t have afforded tuition, and that I had effectively been able to graduate from college because of him. “Thank you, Grandpa. 감사합니다,2” I said, and kissed his forehead. He had drifted back to sleep before I left the room.

The night he died, Liz and Ben and I drove out into a neighborhood in the middle of the hills, leaned up against the car, ate donuts, and looked up as the Perseid meteor shower drew streaks across the sky. My grandpa always loved fireworks, so I like to think he had the best seat in the house. 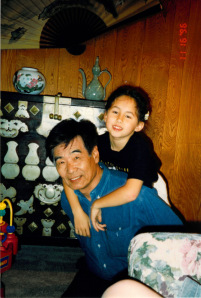 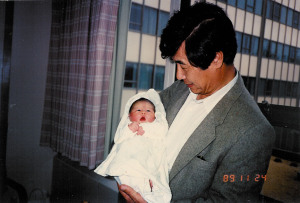