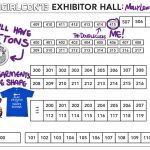 I’m attending GeekGirlCon again this year, and (most excitingly) I forked over money to have a table! at a real con! It’s very exciting for me because it’s my first time officially Tabling At A Con and now I’m not afraid to fork over money for tables at other cons— and plan to do so soon! I actually have a form on this site where you can nominate a con (or any other venue) near you for having 100% more Molly Lewis at them in the future.

The Friday before GeekGirlCon kicks off, I’m also doing a show with The Doubleclicks at Wayward Coffeehouse (the only Whedonverse-themed coffee house as far as I know, though I’d love to hear if there are more). More info here.

I’ll also be at OryCon in Portland next month, more info on that later.

It’s been a productive couple of months. My secret(ish) Batcave shows in Seattle have been doing really well so far, and I’ve gotten a LOT of new songs out of them (which will probably be cobbled into an album by next summer). I wrote a song for Joseph Scrimshaw’s Flaw Fest kickstarter (which you can hear as part of his album) about issuing lethal karate chops to people’s butts.

I also wrote a theme song for Jenn & Trin In The Morning, and it is darned catchy. DARNED. CATCHY.

EDIT: Oh, hullo, one more thing. On November 2nd (and maybe going into November 3rd a little, who knows,) I’ll be taking part in the Extra Life charity drive. I’ll be playing D&D with some friends, and your donation can actually help determine what my character will be, and how well I’ll do!